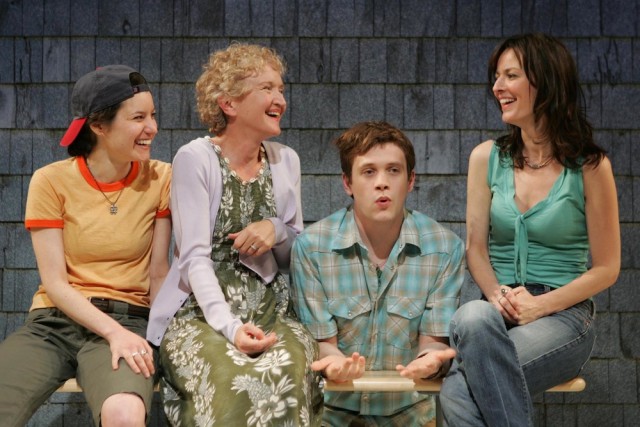 Somewhere in Rhode Island—the town of Twig on the Atlantic coast—a middle-aged housewife is trying to achieve Buddhist serenity by getting rid of all her possessions, eventually including her husband. A lesbian is in crisis over whether to marry her partner even though she smokes. A young gay man with serious commitment problems is falling in love with a large mako shark at the local aquarium. What’s more, it appears the shark is just as interested in him.

“A screwy little jewel of a play… It’s as unconventional a conventional look at love as you’ll find.” – The New York Times
Read full review.

“Adam Bock’s delightful new comedy, Swimming in the Shallows, is set in the fictional coastal town of Twig, Rhode Island, and it’s characters have a twiggy charm: The farther they go out on a limb, the more winsomely bent and breakable they get.” – Time Out New York

“It’s a tremendous relief to encounter Adam Bock’s Swimming in the Shallows, a show that hits so many right notes, with so much smarts, winning charm, and goofy humor… that the hardest part of my job here is keeping the hyperbole under control… What sets Bock’s writing apart from other plays that strain to make literal the metaphorical is the natural ease with which he introduces the potentially preposterous situations —and more importantly, the tremendous empathy he has for all his characters. We believe in these people, and root for them.” – Back Stage West