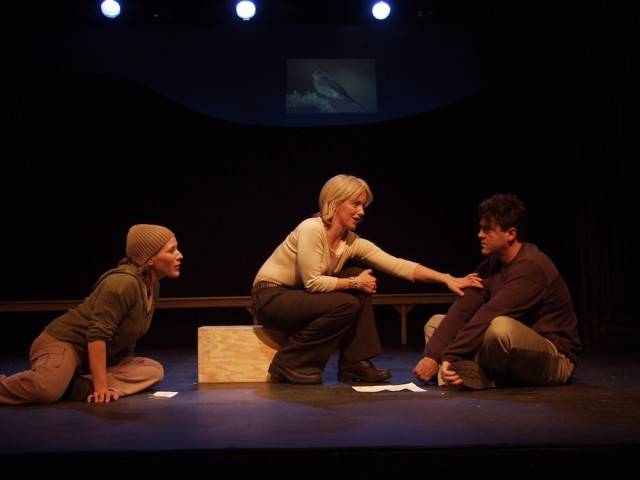 Siblings Ed and Adele inherit an enormous aviary that their late father built for his deceased wife, whose soul, he believed, had transformed into the body of a wren. The grown children are faced with the dilemma of what to do with the crumbling structure—sister-in-law Jane wants to build tidy new houses; friend Olivia wants to build The Church of the Fifth Day honoring birds and the Fifth Day of creation; Ed wants to let the building fall to the ground. Folded into this debate are issues of religious conviction, fear of commitment, the way Russian ballet resembles a hockey game, and the courtship of Ed by Tom, a gay professional hockey player.

“Mr. Bock isn’t much interested in conventional theater. Instead he mixes effervescent dialogue with incongruous structure until your head is spinning. Themes of commitment and faith and loss float around Bock’s play, never quite landing—as elusive as a quick bird, probably deliberately so.” – The New York Times

“Five Flights is breathless fun—and bravura art, too. It features the best gay male kiss I’ve ever seen on the stage. it’s a long, juicy, passionate smooch between Ed and Tom that builds huge tension in the theater, shifts just long enough to let the audience laugh a little, and then keeps on going.” – The Advocate
Read full review.